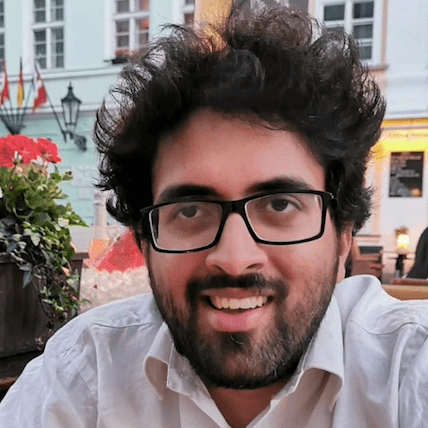 Postdoctoral Researcher, Global Data Justice Project at Tilburg University, Founder of Justice Adda, Co- Founder d- Van Siddharth is a Postdoctoral Researcher at the Global Data Justice project and is interested in the role data plays at the intersection of law and development. Prior to joining TILT he was a PhD researcher at Humboldt University Berlin, and has studied law at the University of Cambridge and at the University of Delhi. He previously worked as a German Chancellor Fellow at the Max Planck Foundation for International Peace and Rule of Law, Heidelberg and as a Judicial Clerk at the High Court of Delhi. Siddharth is the founder of Justice Adda, a legal design social venture in India, and a researcher at FemLab.Co

At the Global Data Justice Project, we are studying how technology firms are using their digital infrastructures to enter into new domains and create new markets for their products and services. For example, firms that specialise in security, such as Palantir, moving into public health, or IT firms such as Cisco or Microsoft moving into education. These are areas where such firms do not have previous domain expertise or knowledge but because of their digital capacities, financial resources and data analytics are able to quickly scale up to offer solutions. These moves are leading to fears about whether tech firms with their scale and capacity are crowding out traditional expertise. This has been described by Tamar Sharon as Sphere Transgressions (or Sector Transgressions in our project), where firms use their advantages in one sector to enter and dominate existing players in another. It raises questions about whether regulators have the ability to scrutinise and demand accountability from such firms as they move into new sectors and offer new services, and whether the existing rules are sufficient to evaluate their conduct.

In the project we ask whether there are distinctions between sector transgressions and sector transitions, how we can identify them, and what tools and laws are necessary to regulate them.

In this blog, I look at a recent pandemic power grab, which took place in the football world and led to an extraordinary few days: the creation and subsequent collapse of the European Super League. I see this as an example of a transgression, because it is a move by football clubs from being sporting institutions and businesses to being regulators, and policy makers who would influence the future of football. I examine the rise and fall of the league, and why the responses to this power grab might be an interesting case to identify sector transgressions and think of ways to hold tech firms to account.

The league announced that the competition format would consist of 15 founding clubs and 5 clubs that would qualify annually based on how they have previously done. The ‘Founding Clubs will receive an amount of €3.5 billion solely to support their infrastructure investment plans and to offset the impact of the COVID pandemic’. The Chairman of the League proudly stated ‘We will help football at every level and take it to its rightful place in the world. Football is the only global sport in the world with more than four billion fans and our responsibility as big clubs is to respond to their desires.’

The reactions to the formation of this new exclusive and self-regulating league were swift and furious.

The European Football Body, UEFA and several domestic football federations came out with a strong statement and said ‘This persistent self-interest of a few has been going on for too long. Enough is enough.’

The Manchester City manager, Pep Guardiola, despite his team being in the Super league, responded and said ‘It is not a sport where success is already guaranteed or it is not a sport when it doesn’t matter where you lose’. Jordan Henderson, the Liverpool captain, tweeted on behalf of the team and in defiance of the owners and said, ‘We don’t like it and we don’t want it to happen. This is our collective position’. Boris Johnson, the British Prime Minister, said he would use laws to ensure that this did not happen, a term he called ‘legislative bomb’. The French President Emmanuel Macron welcomed that French clubs did not join the league, and several current and former players spoke out condemning it as an exclusive, unaccountable and unsporting idea.

The Super League gave almost no details of how it would promote Women’ s football with fears that such a plan would in fact harm the growth of the game because the clubs in the Super League did not represent the leading women’s football clubs. Tellingly, several fan and supporter trusts also spoke out bemoaning the lack of transparency by the football clubs, criticising their greed, as well as questioning the changing nature of the football club as a community institution. On 20th April, several Chelsea fans protested in the run up to their game. They were not only appalled by the secretive nature of the move, but also at how antithetical the move was to ensuring fair and open competition and keeping football connected to the community.

Remarkably, within a few hours by the end of Tuesday night, all six English clubs announced that they were dropping out of the Super League. Some issued terse statements, but in the following few hours, others put out grovelling apologies. As of writing this piece two further clubs from Italy and Spain have dropped out, and in a matter of 48 hours, a league that took many years of planning and scheming fell apart.

Takeaways for thinking about sector transgressions

There are a few aspects that are particularly interesting from this episode that can help think about research on sector transgressions.

The first is identifying a power grab and a transgression. In this case, what was apparent and a defining feature was a group of clubs that sought to move from being sporting institutions to regulators. They wished to operate outside the confines of traditional sporting regulators with little regard to the expertise that came with ensuring that sports in general and football in particular is regulated to ensure it remains a public good. Thinking about the nuance that such planning requires was evident in the short shrift given to Women’s football by the Super League.

In thinking about sector transitions and transgressions by firms for instance in the fields of public health and education, it comes to mind how far tech firms are willing to subject themselves to scrutiny by existing authorities, the concessions they demand for offering their digital infrastructures, and what capacities or control regulators can impose on them.

Another aspect of relevance is the question of identifying expertise, and excluding other points of views. In this instance, these clubs sought to exclude others by identifying their own criteria on what constituted a ‘leading club’, and the necessary infrastructure and capacity to be part of this league, determining their own internal code of conduct. They saw themselves not only as sporting teams but also as policy makers with knowledge about how clubs across the football pyramid should and would benefit, despite their obvious self -interest. The swiftness of moving from being service-providers to policy makers is another aspect worth considering for sector transgression work. In this sense, does a transgression still emerge when policies are specially designed to enable some services? In other words, can laws and policies be used to justify transitions and transgressions? Should it not be that services are designed to operate within the confines of an existing policy?

These clubs also tried to change the nature of the sport from one where performance is awarded to one where legacy was rewarded. The clubs almost argued that they were doing everyone a favour by ensuring that only the top teams played each other. As the results did not matter for the clubs to continue in the league, it removed the whole idea of accountability from the sporting institution. Whereas this is one case of a power grab in football, with tech firms, the moves are oftentimes more insidious and are couched in techno-philanthropist terms. It would be important to examine how to fix accountability and responsibility in cases where tech firms argue that they are being altruistic and as a consequence expect that the thresholds for accountability should be lower.

A critical takeaway from the response to the European Super League was the diversity of institutional pushback that the formation of the league provoked. It was clear that the UEFA, facing an existential threat, would certainly push back, but it was not just them but country football federations, country governments, media houses, player unions and supporter trusts that all pushed back against what was seen as a clear and opaque move designed to make the football clubs accountable to no one.

The diversity of institutions is significant, because initially the clubs appeared to be lawyered up to challenge any threats from football associations including UEFA. Yet, they had perhaps severely underestimated the institutional coordination that they would face right from governments to grassroots groups. The recognition of football as a public good, and the community nature of the clubs to a large extent made such a response possible, and it might be easier to mobilise than around tech sector transgressions. It demonstrates, however, the power that people and institutions have in holding such power grabs to account. In this regard, building a coalition of institutions to be able to tackle sector transgressions becomes very necessary.

A connected point to building a coalition of institutions is the power of vocabulary and awareness to be able to articulate grievances and make claims. In this case it was possible to voice anger against the power grab in terms of responsibility of the clubs towards their supporters and their community, the accountability of the clubs in terms of being a sporting institution committed to performing and being rewarded for results, and finally against self-regulation where the clubs showed little consideration for the game as a whole, whether this was in regard to women’s football or solidarity with smaller, less wealthy clubs. In this instance, literacy and community mobilisation became powerful tools towards being able to scrutinise and mobilise against the Super league.

This case speaks to football’s capacity to bring people together, and it has shown the centrality of people in how the game is run. It showcases the importance of ensuring that public goods, which are designed to enhance the quality of life and well being of society, should be held to higher thresholds of scrutiny. This case has also tried to show the importance of articulating injustice in clear terms, strengthening institutional resilience and developing coalitions and building community capacity to mobilise, which together can ensure greater accountability.